A brief letter to the editor published in The Age this morning was all it took to capture local media attention and wide-spread public interest in response to the alleged full demolition of a historically significant residential property at 293 Church Street Richmond, known more commonly as Lalor House (built 1888). Finding no planning permit publicly advertised on the City of Yarra’s website, the National Trust got in contact with the council to clarify the situation. Speaking with a member of the City of Yarra statutory planning team, the Trust has been informed that the demolition permit is not proposing a full demolition of the house, but for the removal of an exterior rear carport, fence, and single storey garage (with the house to remain intact). Yarra City Council was able to confirm that six three-storey town houses have been proposed for the site, with carparking at the rear. The Trust will continue to monitor information surrounding the application, and will assess the plans once they are publicly advertised.

Re-reading the National Trust Statement of Significance, (which can be found here), we noticed Lalor House was classified by the National Trust fifty years ago. When the Historical Buildings Act was passed in 1974, it also appears that Lalor House was one of the first buildings included on the list of state significant places. The Victorian Heritage Register Statement of Significance can be accessed here.

Looking through our archival file on Lalor House, we came across an array of fascinating newspaper clippings detailing the history of the property since it was classified by the Trust in the late 1960s. A newspaper article published in the Recorder on June 17th 1971 details the social significance of the house and its association with Peter Lalor ‘of Eureka Stockade fame’. To read the article in full, see below, or click here. It appears the Trust got involved in dealings surrounding Lalor House after flats were proposed next door in 1973/4, much to the chagrin of former owner Mr. Gordon Morton. A National Trust file note from October 8th, 1973 reads:

A newspaper article published by the Advocate on the 20th of February 1974 detailed the foray, with Mr Morton quoted as saying the following:

It is always fascinating to see the various ways history can repeat itself, with the proposed 2016 townhouses mirroring the proposal from 1974.

Even more intriguingly, newspaper clippings from the 1980’s detail stories of the house and the ghost of Peter Lalor. This article published on the 16th of April 1980 describes the strange happenings of the house, and the gruesome deaths of former occupants. To read the article in full, see below, or click here. An article published in the Clarion on the 21st of September 1983 discusses strange occurrences associated the house further, describing mysterious ghost cats and ankle grabs. To read the article in full, see below, or click here. 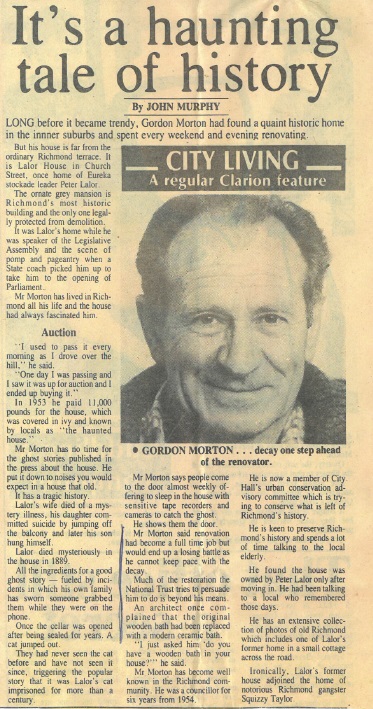