The campaign to stop the demolition of the London Hotel continues this week, with the City of Port Phillip voting unanimously at the council meeting on Tuesday night to undertake a new heritage study to determine whether the site meets the threshold for local significance. In a motion put forth by Mayor Cr Bernadene Voss, the council also voted to request interim heritage overlay protection by the Minister for Planning. While the developer currently has a live demolition permit (due to expire within two months), the City of Port Philip failed to grant or refuse the permit application for the new building within the prescribed 60 days. The matter will now be taken to the Victorian Civil and Administrative Tribunal, with a hearing scheduled to begin on 22 August.

As outlined by the Trust Advocate at the end of last week, a lack of local heritage overlay protection had seen the site threatened by a developer seeking to demolish the Hotel and build an 8-storey/32 apartment complex in its place. The council’s heritage adviser David Helms argued that the Hotel’s continued alterations over its long history meant it did not meet the threshold for local heritage significance. As quoted in the Age on 18 May, Mayor Bernadene Voss stood by this assessment, citing this as the reason why the council would not be requesting interim heritage overlay protection from the Minister for Planning. 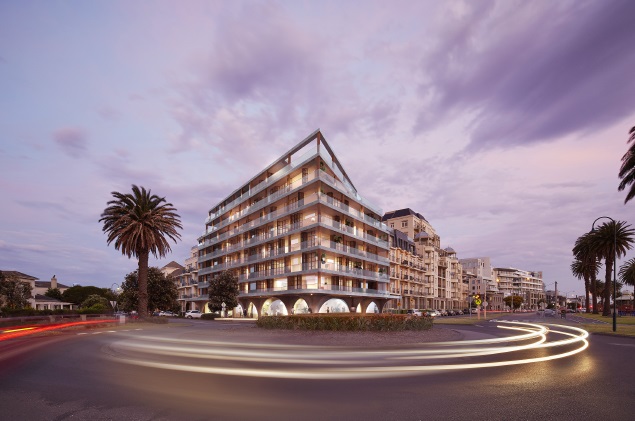 A rendering of the proposed development for the London Hotel site

The National Trust however does not agree with this assessment, and submitted a strenuous objection with the council to oppose the demolition of the historic hotel. You can read this objection in full here. The Trust called for a comprehensive assessment of the social and cultural significance of the place, noting that existing assessments are limited to aesthetic and architectural values.

Responding to the objections of the National Trust, the Port Melbourne Historical & Preservation Society, and over 100 submissions by the local community, Cr Voss reversed her position, putting forward a motion to commission a new heritage study for the site, and ask for interim heritage overlay protection in the meantime.  An extract of the agenda is included below. We urged Council to undertake this work as a matter of urgency to inform a request for interim protection from the Minister for Planning and the preparation of an amendment for permanent controls, a view supported with a verbal submission at the Council meeting. As reported by the Caulfield Glen Eira Leader, the motion was supported unanimously. At the council meeting, Mayor Cr Voss said the council’s job was ‘to listen to the community’, with Cr Andrew Bond saying that by passing the motion, the council was not necessarily making a statement on whether it believed the London Hotel had heritage value, but was ‘asking for someone to have another look at it.’ The unanimous decision was met by a round of applause from local community members present at the council meeting. A report in The Age later the same day revealed that Planning Minister Richard Wynne has declined to step in and grant the interim heritage overlay, citing the Council’s previous declaration that the site did not meet the threshold for local significance as the reason. In hindsight, the council should have first undertaken the heritage study to confirm or deny whether the building has local significance before approaching the Minister. The Trust will monitor the situation to determine whether the City of Port Philip will proceed with the proposed heritage study.